David Shearer is one of today’s most innovative guitarists and singers. For over thirty years, he has been taking the acoustic guitar on an amazing journey. Deep within his roots, David heard the call of strings reverberating in aged wood. He intuitively explores the ability of the guitar to speak to the soul. A gifted composer and musician, he has created his own genre. Experimenting with alternate tunings, he has demonstrated that modal tunings hold another dimension in the art of musical expression. Vocally, his voice convicts and soothes. David also finds expression through Native American flute, dulcimer, and harmonica.

David's deepest desire is to use the gift of music to share hope with those who feel hopeless.

THE SEED IN MY LIFE: a Biographical Sketch of Guitarist and Singer, David Shearer

In every person there is a seed that, I believe, was planted by God Himself. If nurtured, this seed can grow into a beautiful talent, a talent used to share God's love with the world.

The seed planted in my soul was the love for music. My earliest memories find me intently listening to my mother's classical records. I would ponder as to how such inspiring sounds were produced. When Mom would take me to church, I loved to hear the pipe organ's rich tones fill the air. Because finances were not good, I was not able to take the music lessons I deeply desired; but as I grew from a small boy to a young teen, I saved my pennies and eventually purchased a Conn classical guitar. I had heard some very talented guitarists and knew that instrument was calling my name. Still, I had no funds for lessons; so I took every opportunity to observe guitarists in action. Every move of their fingers became a lesson undercover for me. I would go home and attempt to recreate what I had seen someone else do.Sometimes, I feared my family was about to throw my guitar in the garbage as I repeated the same chords over and over until I liked what I heard. Little by little, the chords began to flow forth. My ear could hear the tones and my fingers would reproduce them.

The human voice also held a fascination for me; so I began to combine singing with my guitar strumming. I was intrigued with the way folk singers like Peter, Paul, and Mary could touch hearts with their songs. I had noticed that the young people around me would listen to a soul-searching ballad, but refuse to hear a sermon from the pulpit. God began to convince me that I could minister to hearts through music.

Prayerfully, I set out to improve my guitar playing and voice so that God's message could be heard. Hours of practicing turned into years. In the quiet of the night, I would suddenly hear a tune or a poetic verse. It was as if God had put his thoughts in my mind. As I shared the inspired songs, hearts began to listen. Praise God! He was using me.

One day, just after I had purchased a new twelve-string Martin guitar, my whole musical world came crashing down. I had been working full-time in a sawmill and taking night classes to finish my high school education. As I was working in the mill, one of the belts on a conveyor slipped off. A lumber pile-up occurred. Fellow workers turned off the equipment, and we began to repair the conveyor. Without warning the machinery began to move. My right hand became entangled in the V-belts. I felt as if my entire arm were being ripped from me. With a portion of my fourth finger missing, and my hand horribly mangled and torn, I was rushed to the hospital. The orthopedic surgeon worked tediously to put my hand back together. No one was able to find the missing portion of my finger, so the surgeon planted the nail bed fragment in the top of my stump.

For weeks, I was in shock, thinking I would never be able to play my guitar again. I cried out, "Oh God, please heal my hand so that I can continue to praise your name." Weeks turned into months. Physical therapy left me with a somewhat twisted hand and one third of my fourth finger missing. Despite this, I continued to work with my guitar. Each day, I called on the Lord to sustain and encourage me. Six months later, I was again playing my guitar and singing. My picking and strumming pattern had changed, but I was doing it. My heart rejoiced. My Heavenly Father had planted a new seed.. A feverish energy pushed me on. I knew God was the Great Healer and Sustainer. Nothing could stand in the way of my joy in Him.

In time, I began to contemplate the idea of putting the music that God had given me on tape. I started to work in a steel fabrications shop to earn money for the project. After much sweat, I had the funds and produced a cassette album called "Jesus, to You I Owe Everything." I only replicated 100 copies, but my heart and soul were in each one. I wanted the world to learn that God was alive and well.

In 1979, I had another rich blessing come into my life. I married my wife, Lynn. I knew we were soul mates, brought together by the hand of God. Through the years, we have composed many beautiful songs. She has encouraged me along life's way, even when everything seemed hopeless.

One day, while I was driving home from work, I was hit by a loaded  26,000 gross ton truck going 60 miles per hour while my own car was at a stand still. In a moment, my life, again, was changed. A path that was so clear became muddy. After this turn, I would have to revise my life totally. I agonized with God, "You have sustained me before. Sustain me again."

After one year of medical treatment and physical therapy, I began a new path in life. Unable to do heavy labor, I chose to put my musical talents to work for my family, as well as for the Lord. With the encouragement of my wife and musical acquaintances, I purchased recording equipment that I dedicated to the Lord's service. I would call my studio "Inner Peace Recording (IPR)" as God had,indeed, given me inner peace through many trials in life. For about a year, I practically lived in my studio as I poured over manuals and taught myself how to use the equipment. I had read everything I could get my hands on to help me choose the best equipment within my budget. Now, I had to master the use of it all. Knowing that God gives wisdom, I relied on Him to give me the knowledge and patience I needed to succeed. I also asked my family to have that same patience. Today, my wife and three sons encourage me and are catching the "digital bug" as they work with me on our latest album.  Fellow recording engineers are amazed by the clarity that comes from my small yet sophisticated studio. Believing that Christ is coming soon, I hope to share His message of hope with this starving world. May my musical talent and recording studio be used to hasten His return!

Away from Rush Hour by David Shearer 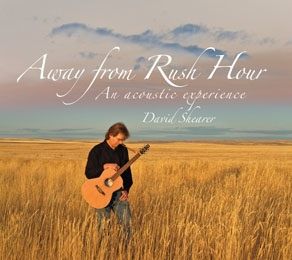 We will be proving acoustic music and song for a great group of residents and their families.

My family will be sharing music at Journey to Bethlehem in Wenatchee, Washington on December 7, 2019 from 6:00 to 6:15 and from 7:30 to 8:00 PM. Come enjoy this reenactment of Mary and Joseph's travel to Bethlehem. Dress warmly! Local musicians will be providing the music. j2bwenatchee.org. Pick up your free tickets to this event.

A Time of Thanksgiving

A group of dedicated musicians will be sharing messages of thankfulness in word and song, my family included! Come enjoy! and be blessed!

Come experience this Christmas Pageant.  Gary Lawson authored and narrates this program about the Gift that God has give. Enjoy Christ-centered music by a number of the local musicians.  I will be sharing three songs about God's love for mankind.  Find answers to the issues of life!  Go away refreshed.

To Walk as Jesus Walked

Come enjoy an hour of acoustic guitar, Native American Flute, voice and the Word. You will be blessed!

CONCERT CANCELLATION: Due to the current winter storm watch for a snow and ice storm in the Portland area, which is in effect from 10:00 AM January 7 to 10:00 PM January 8, we regret to say that we’ll have to reschedule the Sunnyside SDA Church concert for another time. We believe this is in the best interest of everyone, as we wouldn’t want people to risk their safety in trying to attend our concert or while heading home afterwards. Thank you to everyone for your enthusiasm for this concert! We look forward to sharing our music at Sunnyside Church at a later date. Warm wishes and blessings to all!

Jesus gave us an example of how we are to live our lives.  Come hear acoustic music and song with testimonies about living a life of love in this troubled world.

"Experience the town of Bethlehem as it was the night the Christ child was born.  December 3-6  Online reserved Tours 5:30 to 9:30 Pm Walk-in tours 5:30 to 8:30 Anyone arriving at 8:30 can attend Please dress appropriately for the weather.  This event is free Refreshments will be served.  This Journey includes over 150 Actors and Supporting Cast in Full Costume and a Living Nativity with Sheep, Donkeys, Chickens, and...a Camel!"  reserved tour times available www.J2BWENATCHEE.ORG

Jesus is Still There

Guitar, vocal, and testimony that will convince you of how much our Heavenly Father cares

Come apart and rest a while with us as we share God's love through acoustic music and song!  We will be sharing our heart-felt desire to be lights for Christ in a troubled world. Acoustic Guitar, Piano, Native American Flute, Dulcimer, and Voice

Listen to Away from Rush Hour samples: